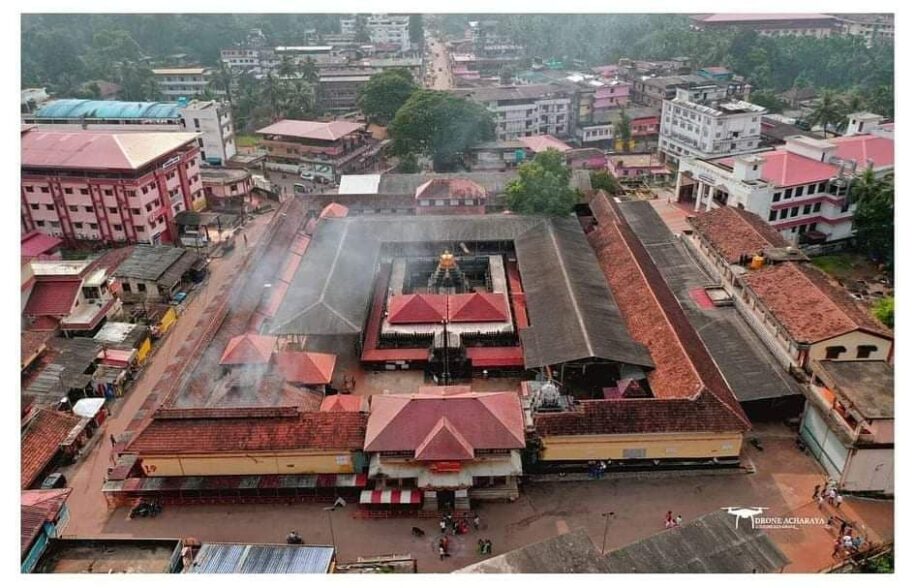 Posted by studio01productions on January 24, 2022 | Featured | No Comments

Kollur Sri Mookambika Temple is one of the seven abodes of Salvation in Parashurama’s creation is located in the Udupi District of Karnataka State. Adi Shankaracharya founded the Shree Kshethram. This is a shrine dedicated to the Goddess Shakthi. Kollur is a tiny village on the base of Kodachadri Hill, among the verdant canopy of the Western Ghats. The Mookambika Temple, one of the seven most holy places in the world, is dedicated to the Goddess of emotional strength and force. Devi Mookambike is worshiped here as the Shakthi Devatha.

Kollur Sri Mookambika Temple is situated between Gokarna and Kanyakumari & is said to have been constructed by the sage Parashurama. The temple’s primary deity is a swayambhu (self-born) jyotirlinga divided in half by a golden line, with the left half representing Tridevis and the right half representing Trimurtis. A four-handed panchaloha idol of Goddess Mookambika is also erected alongside this.

Every morning at 5.00 a.m., “Nirmalya Pooja” is performed, and Devotees get the opportunity to observe the Swayambhoo Lingam during this time. In the Temple, Trikala Pooja is done every day. Thousands of devotees come to the temple to find relief from their troubles, sufferings, and challenges, or to commit their religious vows, or simply to appreciate the natural scenic beauty of the surroundings. Every Tuesday, Friday, and during the month of Shravana or on the Moola Nakshathra day in the months of Phalguna, thousands of devotees from various states visit the Shree Kshethra (Which is the birthday of Shree Devi) This Temple is routinely visited by important politicians (representatives of the people), film stars, significant industrialists, and others.

The Mookambika Temple’s main entrance is on the eastern side. The Goldplated Dhwajasthambha or Flag Post can be seen as one enters the temple at this entrance, and behind it is the Deepasthambha or Lamp Post. “Pillar’s Ganapathi” is the name given to the Ganapathi carved on this pillar ( Kambhada Ganapathi). Only after giving their salutations here may worshippers enter the Temple. Inside the Temple’s Sanctum Sanctorum, the “Pancha Loha” statue of Mookambika Devi, in a sitting position in “Padmasana” with a loving smile on her face and holding Shankha Chakra on her two arms and other two hands with protecting and blessing poses, delivers “Darshan” to the Devotees. One can experience “darshan” of the Devi statue in front of it.