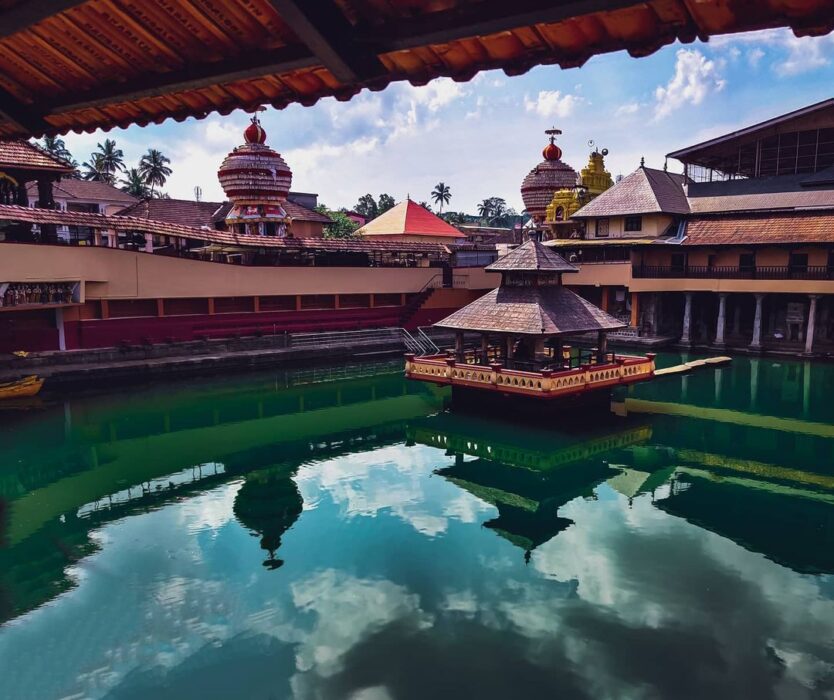 Posted by studio01productions on January 25, 2022 | Featured

Udupi Shri Krishna Temple is a well-known old Hindu temple in the city of Udupi, Karnataka, India, dedicated to Lord Krishna and Dvaita Matha and located at 65kms from Kalavady Farmstay, around 1,15 minutes drive to Udupi Shri Krishna temple.

The Matha region is reminiscent of a living Aashram, a sacred location where everyday devotion and life are practised. Several temples surround the Shri Krishna Temple, including the Udupi Anantheshwara Temple, which is over a thousand years old.

The Krishna Matha was created in the 13th century by the Vaishnavite saint Jagadguru Shri Madhvacharya. He was the founder of Vedanta’s Dwaita school. Madhwacharya is said to have discovered Shri Krishna’s vigraha in a huge ball of gopichandana. According to Sri Madhvacharya, the Vigraha is placed Pashchimabhimukha in his Tantrasara Sangraha (facing west). All of the other Vigrahas in Ashta Muthas also face west. Devotees may constantly see Lord Krishna through the Navagruha Kindi, which is decorated with an arch named after him, and the Kanakana Kindi, which is decked with an arch named after him. In addition, a statue has been constructed. Navagraha Kindi is a comparable window that covers the Vigraha’s immediate front.

The day’s activity commences exactly at 4 a.m. with the blowing of the conch and the beating of the ‘Nagari’ in the gopuram outside the Mutt premises. With this the Swamiars and other employees of the Mutt wake up, attend to their ablutions and take their bath. With the ringing of the bells outside, they open the door of the garbhagriha. Then they open the door of the inner room to the beating of ‘Jaghante.

This commence 5 days prior to 2. Vasantotsava:

This festival commences in chaitra Shudha Pratipade and draws to a conclusion on Vasantha Dwadashi.

This is celebrated on the next day after simha Masa, Krishnashtami. Sri Krishna’s idol will be placed in gold chariot and taken round.

Two chariots will be drawn daily from Kartika Shudha Dwadashi till the Fullmoon day.

[The daily pujas can also be offered as Seva. Please contact the Seva office for more details.]

Every alternative year Udupi Shri Krishna temple conducts The Paryaya with great pomp and grandeur. The paryaya takes place at Udupi in the early hours of the 18th day of the even-numbered year of the Gregorian calendar. Preparations begin as early as the preceding year. The ascending Swamiji of Sarvajna Peeta travels to Dandathirta, a village near Kaup south of Udupi, where he bathes in a sacred pond and does puja according to Madhwa customs. At roughly 3 a.m., the rising Swamiji enters Udupi city, taking over Lord Krishna’s puja. A parade is held from Jodukatte (near the ancient Taluk office) in Udupi town, with ascending Swamiji and other Swamijis being carried on a planquin, as well as cultural performances and dramas. Previously, the procession began at Kinnimulki, which was the southernmost point of Udupi town at the time, or the entry point.

The Swamiji then enters Krishna Matha, escorted by the outgoing Swamiji, to formally take over the reigns of Krishna Matha. The handover ceremony takes place at Krishna Matha’s Sarvajna Peetha. The descending Swamiji turns over the Akshaya Patra and the temple keys to the ascending Swamiji during this ritual. In the Rajangana, a ceremonial durbar is held. Many ceremonies are still performed as they were seven hundred years ago. For the benefit of the general people, a public ceremony is staged at Rajagana inside the precincts of the Krishna Matha.